I had been suffering from a very sensitive scar on my lower left leg, which I had got from a previous surgery. The scar was so incredibly sensitive that I decided to go see my GP. He reassured me and said that it was only scar tissue and they couldn't do anything about and that eventually the pain will get less.

I woke up one morning and to my horror found that scar and now turned into a lump the size of a golf ball. I immediately made an appointment with my GP. When he saw my leg, he was horrified. That is never a good sign. I immediately got referred for a biopsy. I remember not thinking that it would be cancer. I just thought it must just be a lump and they will remove it and I will just go back to my normal life, boy I was so mistaken.

I got a phone call from the Dr about 3 days after the surgery, requesting that I come in to see them regarding my results. It's very rarely a good sign if the Dr requests you to come in to get the results and requests you bring someone with you. I remember getting the news and just looking at him in disbelief. I felt like this was just all a bad dream and I was going to wake very soon and not have cancer, but unfortunately I never did wake up from that bad dream. I was referred to bone cancer specialist immediately.

The next few days I had every test done you could think of, bone scans, MRI scans etc. They had to see if the cancer had spread and that really scared me. Sitting in the hospital waiting for the specialist to see and read my fate was really stressful and it just felt like I was waiting forever, but in actual fact I probably only had to wait for about 5 minutes.

I had prepared myself for having surgery to remove the rest of the tumour and having Chemo, but what the specialist told me was something I had never ever prepared for. The diagnosis was that it was Ewing Sarcoma, which is mostly seen as a children's cancer. The tumour had attached itself to the nerve of my foot. The specialist came with the blow, because of the location he felt that Surgery would not work because they would need to remove the nerve and the tumour together and it wouldn't be a guarantee that they would get everything, it would also mean that I would never use my foot again, he followed by saying that the only option would be to have my leg amputated.

I was shocked, this is something I definitely hadn't expected. Chemo, Radiotherapy, Surgery yes, but amputation, never. The surgery was planned for the following week and I guess I am grateful for that, because it didn't give me much time to think about what was going to happen.

It's hard enough coming to terms with the fact that you have cancer, but too also hear the news that you will need to lose a limb and that it was still no guarantee that it would save my life. The cancer could so easily still spread. I felt I had no choice and would do anything to try and save my life. I remember coming too from my surgery with such a determination to make the best of the situation. I was determined to fight this and also very important to me, be as normal as I could. Physiotherapy followed and I worked incredibly hard to get back to walking. I was back at the office within 4 weeks and playing squash within 6 weeks. 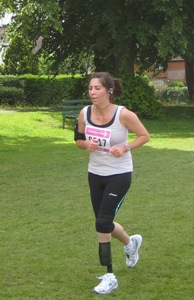 I do consider myself incredibly lucky to be here and very proud of what I have achieved, but I also know that without the incredibly support from my husband this all would not have been possible. The amputated leg has really never stopped me from doing anything and if you met me for the first time you would never guess that I had a amputated leg. I have just taken up running. I seem to be much better at it now than I was when I had two legs. Just completed my first 5k run and my next ambition is the London marathon.

Anything in life is possible, just believe.